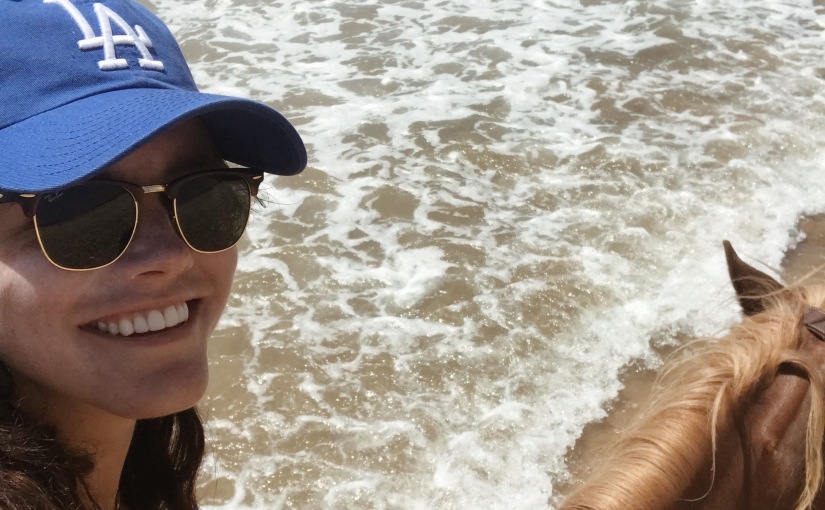 This morning I went surfing again and I had fun because the waves were pretty tame and I was able to go out with the group, yet try and surf them by myself. I enjoy it more when I can catch a wave without being told which wave, when to stand and with a push. After about 2 hours we took our wet suits off and relaxed on the beach. Lunch was couscous and some instant coffee that I bought from a man selling it. The group was planning on staying longer, but I wanted to get back and figure out our transportation to Marrakech tomorrow. We had flights booked, but everyone said that it was way smarter to take a car or bus. 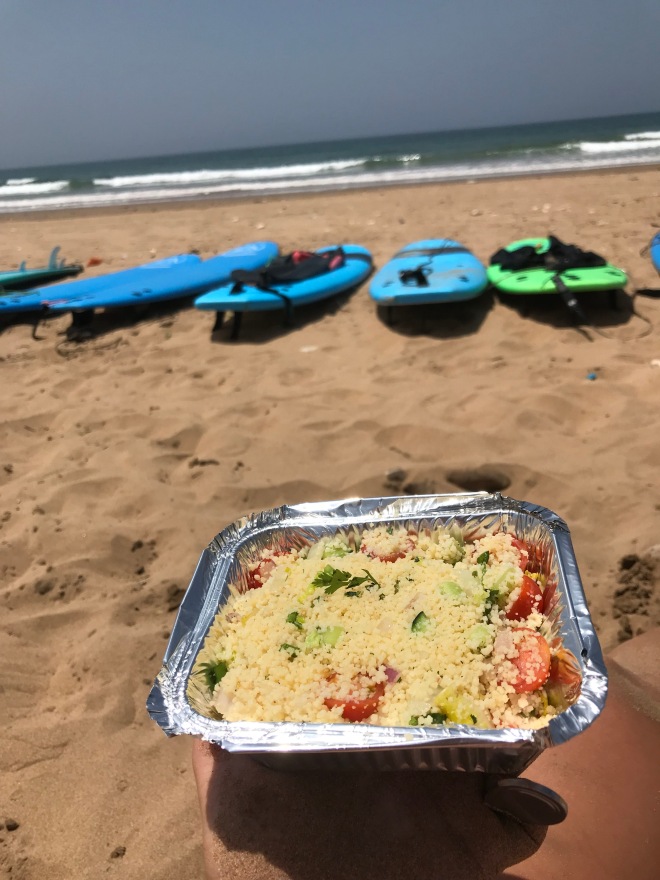 I decided I’d walk back along the beach, since it would only be about 30 minutes. Along the way I was offered a “taxi” on a horse with this boy who was about 19. I said no but eventually he convinced me. The horse didn’t really want to go straight so it wasn’t any faster than walking, but it was fun to try and talk french to the owner (who asked my age and then asked me to take off my sunglasses because he didn’t believe me). I then got scared once the horse started to gallop! Galloping in general is a little scary, but doing it while sharing a saddle is worse! I managed to stay on, so I do admit it was fun. Once we reached the end, my “taxi driver” asked to take a selfie. He then proceeded to do cheek kisses and even had the courage to go in for a regular kiss which I promptly pulled away from and told him no way!

I walked a short distance back and struck up a conversation with a guy who had just finished surfing. He worked at a hotel next to mine and said we should go there for dinner tonight. He said they have wine on the rooftop, so it was pretty much a done deal. I stopped to pet the cat which I’ve named nos-nos and then went to get ready for dinner.

We probably arrived at this place, called Manga Guesthouse, at about 8:45pm. It was a little confusing to get into because I think it’s meant for hotel guests only. However, it was such a cool hotel that I’m glad we went. If I were to go to Taghazout again, I’d probably stay there. The rooftop was fantastic and the food was probably the best I’ve had. We finished around 11:30pm and walked the short distance back to our place to find all of the gates have been pulled shut. We started to yell a little bit and managed to wake someone up. Apparently you have to let them know if you’re staying out past 10pm, but I guess we didn’t get the memo.

I had no set plans today so I was a true wanderluster. After some time on the beach, I decided I needed some food and a coffee. While sitting at Zwarf Cafe, I ran into some of my Shaka friends who were walking around town. Of course, I tagged along with them because I missed them already! Eventually they dropped me back off at my hostel where I met my roommate.

We were on our way to meet up with a guy from Minnesota who was on her plane, but stopped at the Super Ronny for a canned mojito first. While inside, it began to storm like crazy. Then, everything went black. It was clear there would be no beach hangout, so instead, we ran to a nearby pizza joint hoping their stoves were wood fire and not gas. It was our lucky day and the ovens were working. We ordered pizza and wine and sat in the dark. Occasionally the electricity would go back on for 5 seconds and the whole place would cheer. However, it turned off 5 seconds after that and everyone would “awwww”. It went on like that the rest of the night.

We arrived back to the hostel, no lights, no A/C, no Wifi and no way to charge our phones. While it was a bit stressful, it was kind of funny and ironic. The rest of the night was spent in true sleepover mode. We stayed up talking about anything and everything, with the occasionally pause to cheer when the lights came back on temporarily. They went off for good around 10pm and didn’t go back on until 7am. Even the cell towers were down so if anyone was trying to reach us, it wasn’t happening.

On my last full day, I decided to join Helina for an afternoon surf. She had an instructor, but I decided to try it solo since I was on the same beach as last week, Playa Hermosa.  It was my first time ever going surfing alone but I felt confident. The waves were still very choppy from the storm last night, coming from every which direction. The white water was pretty fun since it was so choppy but it was hard to surf a clean wave. Then, there was a sudden opening out to the green waves so I decided to take it. I paddled out and only minutes after getting out there a wave was coming my way. I took it and caught it! I rode just a short distance before it closed out on me and I came crashing down. It was then I realized I was very far out and in very deep water (low tide). The waves were so unpredictable that I got a little scared and ended up going back to shore.

I finished my last night with sushi, spicy margaritas, live music and of course laying in bed praying for the A/C to turn back on (power went out again). 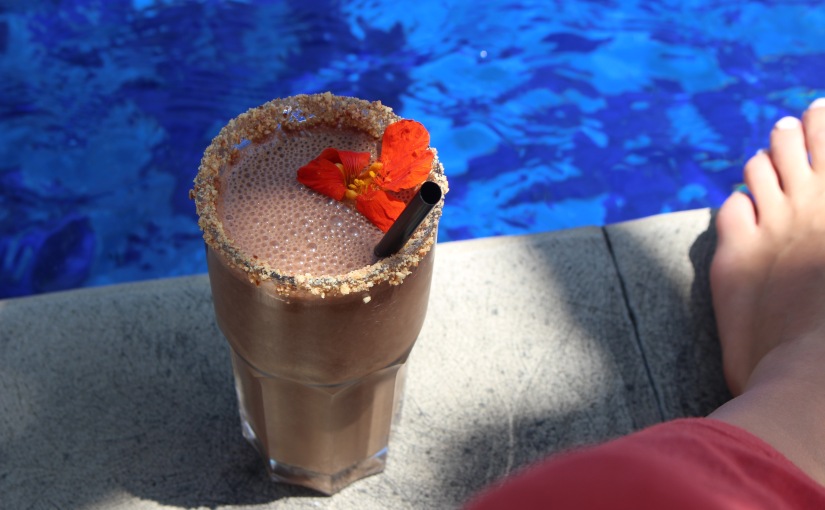 Is there a better combo? No. And I highly recommend in that order! It was great to wake up early get a light breakfast and then hit the waves. I was so happy to catch some good waves after not ideal waves in Australia. I also was successful on a shorter and hard board!! It was a lot of fun and also extremely tiring. But, while I wanted to take a nap afterwards, I also wanted to explore. A gal from Pennsylvania and I took a moped into town to check out a cool bazaar called Love Anchor. 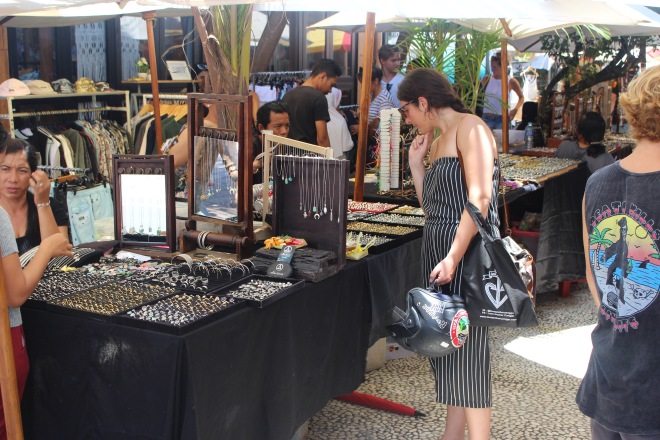 We also went to a great restaurant where we had a wheatgrass shot and a delicious grain bowl. 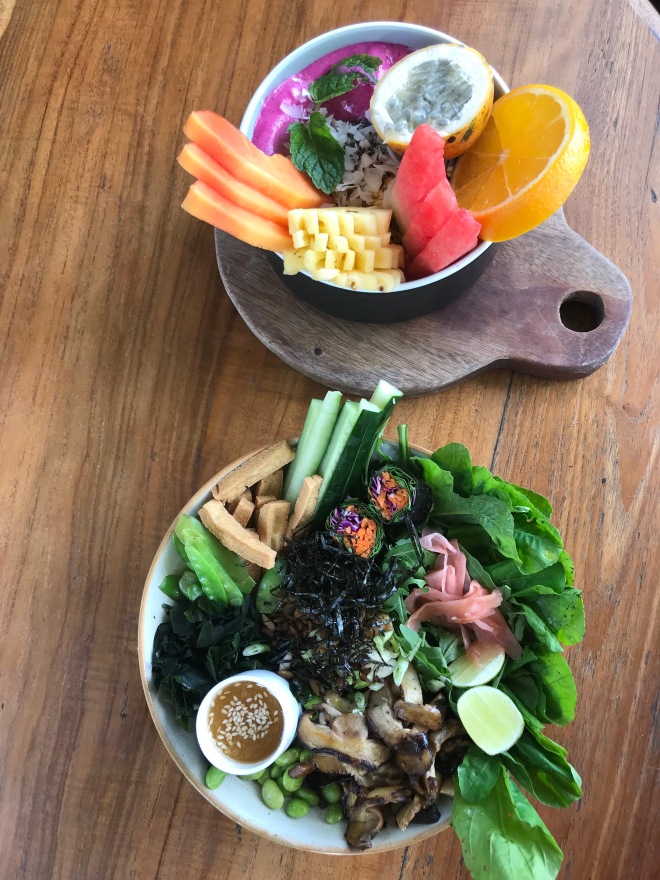 I was back in time for the yoga class and today’s style, Yin, was exactly what I needed. It was all seated (yay!) and involved holding a pose for 3-5 minutes (not yay). It sounded hard, and it was, but it was so worth it in the end. You stretch the fascia that is so hard to get at and you also learn how to talk your mind though something difficult. I picked myself up off the ground at the end, only to lay back down a few meters away on the massage table. I then enjoyed a nice balinese massage. I’m so used to light music playing in the background, and not more than 5 minutes after I was thinking that, someone nearby started playing a drum set. Not really what I had in mind, but I laughed to myself and actually really enjoyed it (luckily they were pretty good). The day ended at a place called Deus where I shared a pizza and listened to some live music until it was time for that nap I’ve been wanting to take all day.

The next day was pretty similar, healthy breakfast over interesting conversation with a woman staying here. The bowl was made out of beans! 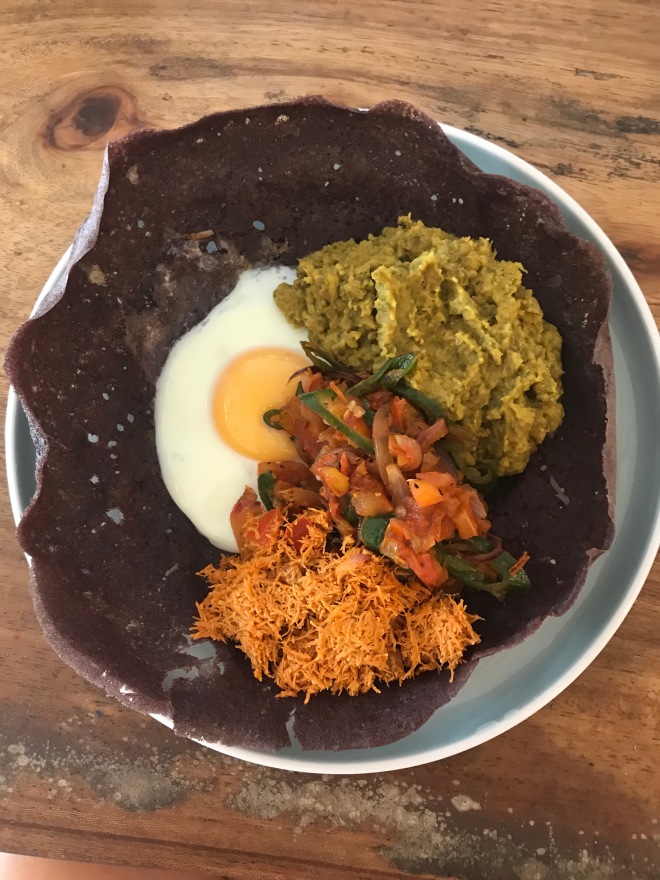 Next, I did a little writing, did some scooting in the morning to the beach (caught the last 3 minutes of the Super Bowl game), followed by another photo worthy lunch. 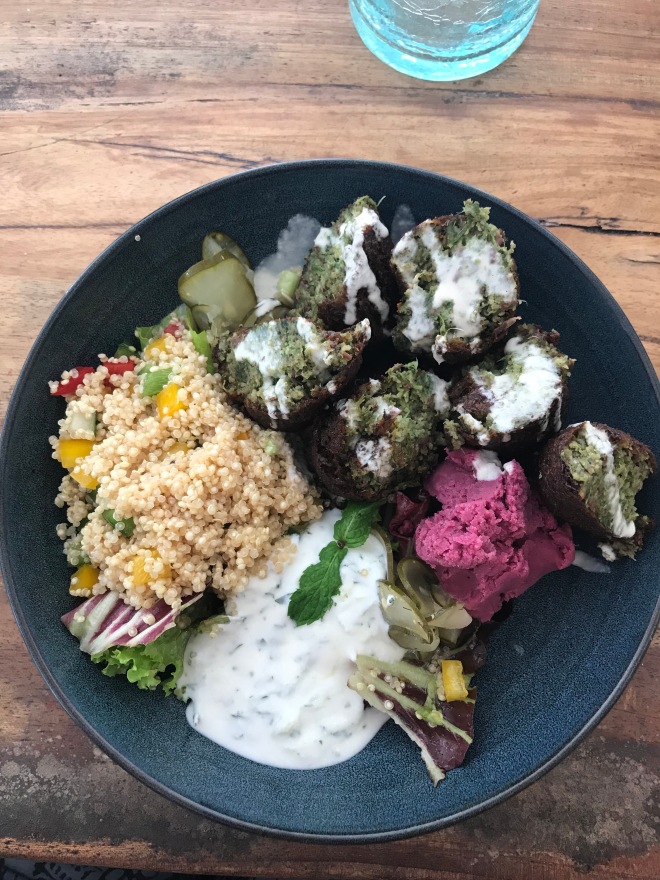 Following lunch was surfing, which ended up getting rescheduled since the waves weren’t big enough. I was slightly glad as I was feeling a bit under the weather. I forgot about the whole not using the sink water to brush your teeth thing.. I tried to tough it out but ended up taking one of the z-packs that my travel doctor gave me. I started to feel better so I’m glad I did. I also ended up taking a natural motion sickness pill as I had a 45 minute drive ahead of me to Ubud.